Review of The Verbs of Desiring 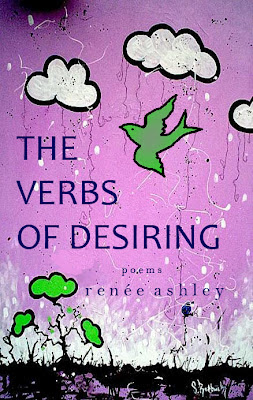 The Verbs of Desiring is Renée Ashley’s sixth collection of poems. It won the 2009 New American Press chapbook contest. This is a collection that stretches in multiple directions at once. It reminded me of other poets like Edgar Bowers and George Oppen who not only address their topic but create a language that embodies the complexities they find in the world.

The opening poem, which is the title poem, declares, “How tired the self is of the self, its earth twirling in the air and/not-air.” It is an appropriate opening to a collection that not only explores desire, but finds the self blurred in a simultaneous becoming and unbecoming state. That is, identity is a verb and not a noun. We tend to think of the self as a fixed object, something that means one and only one thing in our head but “There are more ways to mean/than you can make note of.” So there are “A panoply/of possibilities.” Even the absurdity of “all those bears pirouetting in your penthouse!” But it is all transition, nothing actually is, everything fluctuates as potential. So the poem concludes, “Oh if it or they were only./Or if you. And, or if I.” It is a magnificent linguistic concentration of all that wishes to be by playing on the fact that “were” is both a form of the verb “be” and is the subjunctive mood.

Ashley allows for some humorous consequences in exploring how “this is becomes unbecoming.” For instance, one poem opens “I cannot put my mother in the freezer and neither can I store her in the attic.” This is not literal, of course, because the poem is about thinking or reflection as the title is “I Have a Theory About Reflection.” The double-entendre clearly falls on “reflection,” because it is about the atavistic rise of our parents or ancestors in how we think. So Ashley declares of her mother:

In every place and in every way the primordial soup out of which the creation rose is still very much with us, every place you find “the single/imperfect discourse of an unfinished world.”

Sometimes Ashley will twist a familiar phrase as in “thrown to the away” rather than “thrown away.” There are parentheticals as in, “She’s not ready to swap (she’s lying) the slender skill of being alive” or “Here/is the hand that knows subtraction. (Cut it off.).” Or a poem will have no punctuation. These are not simply acrobatics, mere dazzling displays but rather efforts toward a kind of fluidity, simultaneity, permeability in how we often, in our desires, contain paradoxes, assertions and their denials. There may be moments these unusual shifts confuse, but working through them to the kernel of her work is rewarding, for Ashley is not just pulling us along in a display of language but she is giving us a language of the phenomenological, and I mean that in the philosophical sense that Husserl put forth. That is, we are looking at consciousness and the structures that appear in it. Thus the poem “Bodies in Increments Bodies in Wholes” concludes “observation dilutes images It must I can do nothing more than this We are the indefinite article.” Here the lack of punctuation heightens the connection between observer, observed and the act of observing.

The nice clean boundaries we like to define our world by become porous, with bits of us mingling with bits of the things around us as we look on the world. This is a poetry that is simultaneously in tune with the physics of our time and the Buddhist doctrine of the Visuddhimagga. The former in more recent times defines atoms as mathematical probabilities in time and space and even says that we literally share atoms with the things and people around us. And the Visuddhimagga says,

In such a world of dancing atoms and permeable selves, the movement of the universe in concert is the only reality. It is no wonder that the last poem, “Wine Not Water Fish Not Frogs” concludes itself and the collection with this wisdom, “I’ve/learned not to find truth in a world. I’m trying to go on.”

Notice this says “a world” not “the world.” The world or any world is the creation of our mind, our desire and all worlds are passing away because the dance doesn’t stop. As the poem prior to this asserts, “You are building the mountain you fall from.” The only way to live is not to construct a world but simply “to go on.”

This is a collection for those who find wrestling with complexities and subtleties a pleasure, the kind of challenge that is fun. It is full of intelligence and wisdom, music and quirky revelation. It is a kind of dance. Let yourself glide across the top of these poems, rapid as a stone skipping along a surface of water, a philosophically insightful surface of water. Dance and mingle with the images and ideas, enter and emerge and you will find after that plunge, you feel reminded of so much it seems you once knew long ago.
Posted by Michael T. Young at 6:25 PM