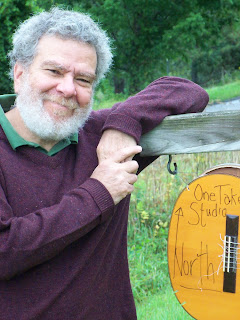 
As an activist against fracking, Richard Levine also wrote "The Talkin' Frackin' Blues."  Take a listen: http://www.youtube.com/watch?v=2QCrTfxOBRo
Posted by Michael T. Young at 7:45 PM No comments:

Review of A Tide of a Hundred Mountains


Many poets strive to marry aesthetic demands with a social conscience.  It is a difficult marriage that many are only occasionally successful at.  Richard Levine is consistently successful at this difficult balance.  This is true of his earlier work as with his current collection, A Tide of a Hundred Mountains.


This collection takes on the problem of how our desires betray us and often also betray the object of our desires.  In the wake of that problem, the collection tries to find a way to reconcile us to those we love in spite of that betrayal.

The collection opens with a short, beautiful poem, called “Snowball.”

And thus the issue central to the collection is established.  It surfaces again in multiple poems and in numerous shapes.  For instance, it is the background in the amazing poem “In a Blue Wood,” an ekphrastic poem based on a painting by Van Gogh.  After observing the painting, how the couple in it “walk toward light,” the speaker begins speculating about them,

A little farther on, it says


But it is, as I said, speculation.  The poem concludes,

The distance between Van Gogh and the subjects is as great as the distance between Van Gogh and us as viewers of the painting years in the future.  All we cannot know is contained in the potential desire, for if we, like Van Gogh, did more than push beyond the merely observable and given, beyond, say, the fact that they “walk toward the light,” the act would strip the moment down to the raw nerve that is our loneliness. But that’s what the speculation throws us back on: the attempt to be together.  The speaker says of his own speculations,

What does he want to be true?  That “they are more happy than not.”

The next poem in the collection is about a couple arguing and the disconnection within the larger frame of common responsibility.  “At It” concludes,

It is this shared responsibility that begins to grow in the collection and, whether it is our shared roots in the earth, our shared social context, or our shared time in this life, there is a common community below the discords that implies a need for forgiveness.  An example is the poem “Disturbing the Peace,” which confronts the difficult issue of the disparity between those who have fought in war and those who have not.  Through its pains and affirmation of the intimate ties between those who share the violent experience of war, the poem concludes,

The poem affirms the commonality of a privacy too deep for common revelation and it is this, in fact, that binds us.  It recalls Proust’s insight that the personal is universal.  And this kind of tie, this commonality is what the poems seek at their core again and again.  In one of my favorite poems, “In Place in Mud,” it concludes,

Our presence echoes into the future; what will be the lesson your presence leaves to future generations?  This is a question about the bed we make together.

Happily these poems are as aesthetically pleasing as they are thematically interesting.  Levine is keen to pick up assonance and he is playful and even joyful in his use of internal rhyme.  In the lines above from “In Place in Mud,” not only is the internal rhyme of beach/teach evident but the prevailing assonance of the long “e” glides through many of the lines while being quietly held together by the remote kinship of moon and spume.  Or, more overtly, his music in “In a Blue Wood,” shines where

Levine is a jazzman at heart and the kind of rhythmic fluctuations and surprises found in jazz are found in Levine’s poems.  Like jazz, they are deeply felt and powerfully articulated, surprising and moving at the same time, while probing the deepest parts of our humanity.
Posted by Michael T. Young at 7:45 PM No comments: