Reivew of Temptation by Water 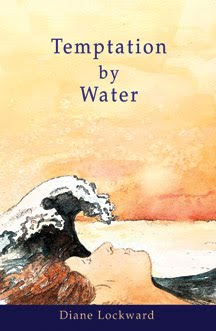 
Temptation by Water is Diane Lockward’s fourth collection of poems and as I did with her previous book, I marveled at how well she puts a collection together. Better than any other poet I can think of, her collections are balanced between the power of each individual poem to stand on its own and the way the poems work together to develop related themes. Temptation by Water focuses not only on the heart and the disappointment or fulfillment of its desires but also embodies a struggle toward remaining vulnerable, to braving loss and pain so as to still be willing to take the risks of truly living. Throughout the collection self-exposure and self-preservation ebb and flow like water, the heart pulses with reaching out toward beauty and the world, then pulls back into itself, elements of passion crystalizing inside it while others are discarded in the wake of new influxes. It is a complex collection of subtly explored emotions, penned with humor and wit, craft and experimentation.

In these poems technical skill and playfulness combine into a subtle yet casual voice. For instance, in the poem “Pleasure” she concludes with an uncommon rhyme called an amphisbaenic rhyme. This is a type of slant rhyme where the words are reversed. Lockward rhymes “sleep” and “peels.” She also creates this rhyme phonetically with “slurp” and “pearls.” Only a truly deft writer could create such pyrotechnics in a poem that sounds completely at ease in its tone, which Lockward does not only in the poem “Pleasure,” but in the other poems throughout Temptation by Water.

The opening poem and the title poem of the collection “Temptation by Water,” prepares us for the difficult and daring world we are about to enter. In it a woman wades into Henri Matisse’s painting “The Open Window” where there is

. . . here and there a splash
of black, like shadows foreboding something
she cannot name.

This is a kind of paradise, but not paradise. We are about to enter a world of poems that is similar to Alice’s Wonderland, a place that has dangers, a place that is not static but where hard lessons are learned and growth is a little frightening. The rabbit hole here is the human heart, its desires, its realizations and disappointments and all it does in response to both. The first poem in the first section, “Weather Report” closes with

. . . a slip of the tongue can change
desire into disaster, how desire and water
can sweep us away, and how we are all
looking for someone to push back
the waves, to grab hold of us, and keep us
here, pressed to the earth.

Of course, that desire to hold back mortality is impossible. No matter who we love, they too are mortal. That fact is confirmed 2 poems later in “Leaving in Pieces,” which is a humorous poem with a serious theme. The speaker’s husband loses his hair, the very thing the speaker says she married him for. Over the course of the poem, she kicks her husband out of their bed and replaces him with a dog, “his liquid eyes, his lustrous hair.” But the reason for it is that the husband’s bald head was always there

forcing me to contemplate
weighty subjects I preferred to ignore,
like my own mortality.

Love and desire in these poems is not just intimacy and acquisition but a battle with death. But that can’t be conquered and it comes “in pieces” or a little at a time: an aging mother’s ever stooping figure, winter taking over a garden, a lover lost. These reminders of mortality intimidate the heart that wants to do nothing more than withdraw into itself. So there’s the centipede who is a

Lucky little arthropod,
without our human flaws.
He has no poetry, no art, no songs,
but knows no fear when darkness enters a room.
. . . . . .(“What He Doesn’t Know”)

It’s a double-edged sword or a tongue-in-cheek conclusion, but either way it’s a metaphor by which the heart can guard itself. In another instance, a woman is “done now with ripeness, the mess of juice.” Or again, Humpty Dumpty is imagined as a cookie among others

. . . baked by his mother,
his grandmother, a procession of women in aprons,

women filling and enfolding him,
bringing him home, wrapped
in the unbreakable dough of their arms.

These are examples of the heart contracting into itself to avoid the breakable world. But no real living is done there either and it slowly must find a way out of its lifeless securities. Sometimes it’s in taking a photo of natural beauty, as in “Capturing the Image.” Or, as is often the case with a Lockward poem, it’s a moment of the sensual pleasure in food as in “Onion,” or “Love Song with Plum” where the speaker takes the plum offered and concludes by confessing

. . . I want to stand at the perimeter
of this plum-luscious
earth, sink a plumb
line for balance, then plummet
like a bird on fire, placate
all my desires, my implacable
hunger for the ripeness of my sweetheart’s plum.

This is the renewal of the heart after the poem “Woman with Fruit” earlier in the collection declared the speaker “done now with ripeness, the mess of juice.” The collection affirms the growth of the heart’s struggle to risk living fully, and to accept the pains and loss that come with passion and love, with growth in a life that is fully lived. The final poem in the collection, “Seventh-Grade Science Project” affirms the risk of a girl catching butterflies and how it was worth it:

To go for that A, to live life passionately, requires accepting the bruises and losses, the “blood on my arms,” it is to be marked by the world and in turn to leave a mark. Temptation by Water is an affirmation not only of the temptation to plunge into the changing tide of life but a seduction, a masterful collection of poems you will not soon put down or soon forget.
Posted by Michael T. Young at 7:19 AM