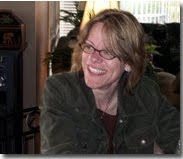 
Michael T. Young: You indicate that the book, 77 Great Fish of North America inspired some of the poems in Gold & Other Fish. Were there other sources of inspiration for the collection? What were they?

Hilary Sideris: I’d written a series of poems based on dictionary definitions of four-letter words, and I started thinking about the word “bass,” with its various meanings and connections to depth, and then, as I discovered, to the word “kiss.” That led me to pike, and I got very caught up in the tactile language around fish and fishing—I imagine the same thing happened to Hopkins when he described the landscape’s “pied beauty” and the tools of human industry—he must’ve fallen in love with the words: “fold, fallow, and plough;/And all trades, their gear, and tackle and trim.” It’s almost as if he’s praising the language itself.

Michael T. Young: I particularly like the poem “Monk.” It applies grace to a moment of a predator killing his prey. So it inverts what we expect when looking at such a moment. How do you define “grace” and how does it work in the context of the collection here?

Hilary Sideris: Monkfish are terrifically ugly animals. But the way they do their work is admirable—full of grace. They hold their caught prey with what looks to us like great patience, before they swallow it whole. I enjoy the contradiction in our love for its sweet flesh and our deep disgust with its appearance.

Michael T. Young: The collection as a whole made me think of our sanitized relationship to predation, how we try to pretend we are above it. Did you have this in mind while writing some of the poems and what are your thoughts on it?

Hilary Sideris: I grew up in a very conservative, evangelical Christian atmosphere, so I spent a lot of time trying to make sense of all the human and animal suffering I saw around me. I fought a lot—physically fought—with my siblings as a child and adolescent. I remember when I was about sixteen, going to school with two black eyes, which I tried to cover up with make-up. My youngest sister, Lisa, is an environmental ethicist. She’s written about what Christian theologians make of “nature red in tooth and claw.” I think we’re both driven to write about predation and violence because of what we experienced as kids in a very aggressive and religious household.

Michael T. Young: You allude to Shakespeare’s Tempest in the poem Cod. I wondered if anything from Hamlet may have been in the back of your mind as you wrote, specifically when he says, “A man may fish with the worm that has eaten a king, and eat the fish that has fed on that worm.”

Hilary Sideris: It was fun to use Shakespeare’s language, but I was more focused on the fish as a symbol of vulgar sexuality, and the implied revulsion in the use of the word “bacalao,” which is something I overheard (spoken in Spanish) in the classrooms of South Brooklyn as a young high school teacher. In Ariel’s song the body, through drowning, “suffer[s] a sea-change/into something rich and strange” but there’s also the sea-change of adolescence, when the female body becomes an object of lust, fear and derision.

Michael T. Young: Jung saw the sea as an image of the collective unconscious and as I read Gold & Other Fish, I imagined diving into the depths of the unconscious. Did you find that searching the traits of these different fish was like searching different aspects of the psyche? That some people are like a pike who “tastes his best/after a bitter fight”? or others are like a goldfish, “a muddy bed, and a bit of privacy/are all he wants.”

Hilary Sideris: Yes, but the nice thing is that these selves or aspects of the psyche tend to emerge when you don’t set out to find them. Writing is kind of like fishing. You use your tools—your language—to try to catch something. With this series, I found that by not trying to write personally or autobiographically, by borrowing the language of biology and fishing, I would often catch something very personal, very true to my own experience.

Michael T. Young: What led you to decide on four tercets as the form for these poems? Was it a conscious decision or something that came organically and then you decided to stick with it?

Hilary Sideris: It’s hard to know the difference between what happens organically and what’s volitional. I think the tercets happened organically, but maybe I willed them into being. I tend to write either in couplets or in tercets, but tercets seemed to work better because there was so much enjambment and slant rhyme going on.

Michael T. Young: Do you have a particular poem or several, in the collection that are especially meaningful to you? Which are they and why?

Hilary Sideris: I’m fond of “Sturgeon” and “Red Snapper”—“Sturgeon” because of its humility, and its ability to exist in several worlds, the salt and the fresh, the kosher and the traif. I also identify with the Sturgeon’s ancient immaturity. “Red Snapper” is a sadder story about being seen through human eyes, being labeled and managed—“under our auspices”, which is to say, doomed.

Michael T. Young: Your poems are highly compressed, like Kay Ryan, Charles Simic or Louise Bogan. Who do you consider your most significant influences?

Hilary Sideris: I’m a fan of Theodore Roethke and Philip Larkin. I like poets who write in the voices of people from particular places. I love Ellen Bryant Voigt’s Kyrie, D. Nurkse’s Voices Over Water, and Maurice Manning’s A Companion for Owls.

Michael T. Young: Are there any prose works that have noticeably influenced your work as a poet stylistically? What are they? Can you say in what way you feel this work or works influenced your poetry?

Hilary Sideris: I don’t know about influence, but I loved Lydia Davis’ books Break It Down and Almost No Memory. When I was young I was crazy about writers like Salinger and Vonnegut who wrote short, punchy sentences. Now I’m more drawn to the Elizabethan—David Milch’s Deadwood comes to mind.

Michael T. Young: What are you working on now? Do you have another overarching subject like fish set for your next collection?

Hilary Sideris: I wrote some poems about Renaissance artists, based on Vasari’s Lives, which was really fun. Then I started reading stories about saints. I’m working on a saint sequence right now, and trying hard to avoid being clever. I’m fascinated by how illogical and successful Christianity has been.

What did he love
in those days but

his theft? Not for
their shape & taste,

but for the act
of plucking them

did he devour
those stolen pears,

sweetened by sin.
Itching with passions

in his sixteenth year,
he would confess,

he was enamored
of error—error

itself, not what
he erred for.